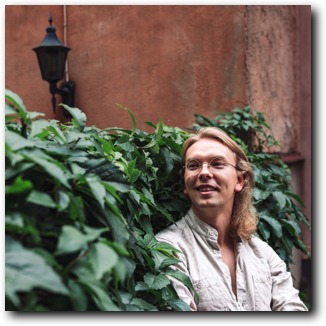 I grew up in a small rural town in the western part of Finland. My childhood was spent hunting, skiing, doing handcrafts, and other such things that children in the countryside occupy themselves with. My father, an air force officer, is an amateur blues and rock pianist, and he always played children's songs for me and my siblings, as well as music by his favorites like The Doors and Cream. This eventually piqued my interest in music and the piano.

At the age of 13 I started to really learn how to play the piano. A Georgian former concert pianist, who has a private piano school in my hometown, became my first piano teacher, apart from my father who taught me the very basics. In the beginning I wanted to emulate him by playing blues and jazz, but when I stumbled upon the music of Chopin, I was quickly swept away by the world of classical music and between the ages of 14-16 I barely listened to anything else apart from the great composers. After a year of studying the piano I felt like I was really doing something worthwhile. I told my teacher that I wanted to become a pianist and for the next six years she started coaching and preparing me for formal studies.

After finishing High School at the age of 19 I did my military service - as is obligatory for men in Finland - and then headed on to Helsinki, where I had been accepted to study a vocational degree at The Helsinki Conservatory. Heikki Pellinen, a renowned Finnish Lied pianist became my teacher for the two years I spent there. These years were characterized by the contrast of ecstatic thrill and existential crisis - I was exited to be around other musicians and to take part in their world, but I had also realized how much work and how many sacrifices it would take to succeed. Nevertheless I carried on studying piano music rigorously, as well as chamber music and Lied, even taking part in the first Helsinki Lied -competition, where I advanced to the finals with my partner.

Having graduated from The Helsinki Conservatory, I was accepted to study a Bachelor's degree in music at The Music and Opera Academy at Mälardalen University in Sweden. By this time I had shaken off any uncertainties about becoming a professional pianist, and I started to practice almost obsessively, experimenting with all different kinds of learning methods and processes - truly pushing myself to find the limits of my capabilities when it came to practicing. The school gave a lot of opportunities to perform in public. Indeed during the first year with my teacher and head of department, Staffan Sandström, I performed solo and chamber music in public weekly. I learned to really enjoy performing during this time.

The time spent in Sweden matured me well enough as a pianist, that I was accepted to do my Master's studies in The Liceu Conservatory in Barcelona, in the esteemed prof. Stanislav Pochekin's studio. His teaching alerted me to any "lazynesses" I had in playing, as he was a very honest teacher: when something was good he let it be known, and when something was not he let it be known as well. The international atmosphere of Barcelona invigorated me and I got to personally know people from every inhabited continent on this earth. Even though the course was a Master's in soloistic interpretation, chamber music became more and more important to me. I founded a trio with a Catalan violinist and cellist, and we hit it off immediately, winning a chamber music competition in Istanbul only after working together for three months.

Now a new chapter is about to begin, as I leave the Iberian Peninsula and head for the British Isles, and I can't wait to start my studies at RIAM's recital artist programme.

In concerts I prefer to explain the pieces I'm playing verbally to the audience, instead of writing everything down in the programme. I have noticed that this breaks the ice and relaxes the atmosphere in the room, and if I get the audience to chuckle a bit before I start to play I feel very confident. I have a very weird taste in music, so I always incorporate some wild cards into my concerts, such as Schulhoff, Respighi and Lecuona, along with more known composers.

The way I understand the role of a piano teacher to be in our society is a bit different. I don't think that the main purpose of a piano teacher is to make more pianists; if this was the case, most student-teacher relationships would be characterized as failures. And as such my main motivation and interest with my students is not how well or how quickly they learn to play the piano. What I'm interested in is teaching them the skill of learning. Playing the piano, just like playing any instrument, is difficult. In order to learn how to do it, you need to incorporate such methods and instill in yourself characteristics like discipline and diligence, that any and every cognitive endeavour in your life will benefit from learning music. As such, I see the piano as more of a tool for my students, with their musical skills developing as a side-effect of reaching for that greater goal.
Discover the Musician Within
Phone: Call us at 01 4972333